Maryknoll Karate Club was founded in 1963 by Tsutomu Ohshima. We welcome you to practice with us today!

Shotokan Karate of America (SKA), a nonprofit organization dedicated to teaching traditional karate in the United States since 1956 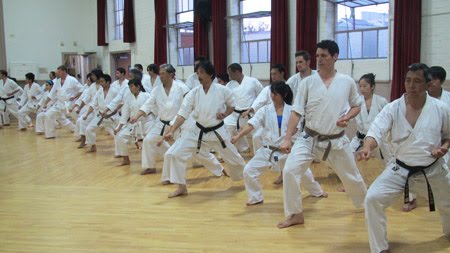 In 2013, we celebrated our 50th Anniversary.  We are one of the oldest continuously operating karate dojos in the United States!

Maryknoll Karate Club was founded in 1963 by Tsutomu Ohshima.  Mr. Ohshima, then a recent arrival to the United States and the new Japanese language teacher at Maryknoll Japanese Catholic School in downtown Los Angeles, was approached by an eighth grader, John Teramoto, who had heard rumors that the new teacher knew some “karate.”  After much coaxing, John convinced Mr. Ohshima to start the first elementary school karate club in the United States.

Mr. Ohshima is a graduate of Waseda University in Tokyo, Japan where he had been a pupil of Master Gichin Funakoshi, the founder of modern-day karate.  Master Funakoshi had introduced karate to mainland Japan from Okinawa and following in the footsteps of Master Funakoshi, Mr. Ohshima introduced and spread karate throughout the United States.  He founded Shotokan Karate of America (SKA), and established Shotokan karate schools throughout the world.  Fortunately for us, Mr. Ohshima made Maryknoll one of his stops on his journey to spread karate around the world.