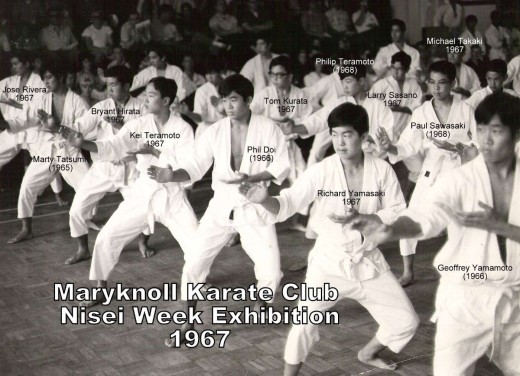 At the turn of the century, Los Angeles had a total population of about 300,000, of which 10,000 were Japanese immigrants.

In 1912 a French born priest who spoke Japanese came to Los Angeles and said the first Catholic Mass for the Japanese Catholics.  In 1921, Maryknoll, a U.S. based missionary society of priests, brothers and nuns took over the mission in Los Angeles to serve the needs of the Japanese Catholic community. The mission established an elementary school, and, in 1939, added a chapel. The first of several generations of Japanese Americans enrolled. Along with a strict academic curriculum, the mission fostered Japanese ethnic heritage, culture and language. Because Japanese Catholics represent a very small portion of people of Japanese heritage, Maryknoll’s doors were open to all faiths.

As a youngster Tsutomu Ohshima had practiced the arts of sumo (wrestling), kendo (swordsmanship) and judo. At the end of the Second World War, judo and kendo were banned by the occupation forces.  He eventually enrolled at Waseda University, one of the most prestigious universities in Japan.  At Waseda, Mr. Ohshima found karate and joined their club where he trained directly under Master Gichin Funakoshi, considered the founder of modern karate and the man who introduced karate to mainland Japan from Okinawa.  In 1952, he was appointed captain of the karate club and also developed the four-corner judging system still in use at modern tournament.

In 1955, Tsutomu Ohshima arrived in the United States to continue his studies after graduating from Waseda. His reputation had preceded him and he was asked to teach karate to adults. In 1956, he started formed the oldest continuing karate organization in America. Mr. Ohshima recognized the opportunity to spread karate and Japanese culture as well as dispelling misconceptions of the Japanese.

In 1963 a Maryknoll nun, Sister Mary Bernadette, met Tsutomu Ohshima and invited him to take over Japanese language instruction for the retiring teacher. By then, he was teaching karate at several locations, including as a faculty member of Cal Tech in Pasadena. What free time he had was spent translating Master Gichin Funakoshi’s texts.  He initially declined. However, he eventually surrendered to Sister Bernadette’s resolve.

The new Japanese teacher instilled strict discipline. He demanded that students consistently put forth their best efforts. When students misbehaved or forgot homework assignments, they were sent to the hallway to hold heavy books, bibles always conveniently available at the Catholic school, over their heads. For repeat infractions or bending arms Ohshima Sensei added additional volumes. He was particularly dismayed to find that many Japanese-American children had trouble properly pronouncing their names in Japanese.  He immediately set out to correct them.   Boys and girls were disciplined equally which particularly impressed the young boys.  He emphasized showing respect, recognizing obligation and knowing the difference between right and wrong.

John Teramoto, then an eighth-grade student, approached Mr. Ohshima in the courtyard one day.  John had heard rumors that the new Japanese language teacher knew karate.  Mr. Ohshima only admitted to knowing “a little.” Recalls John, “I didn’t even know what karate was, but I knew I wanted to learn something from him … there was some kind of aura about him; something heroic… So, I asked him if he could teach us (karate).” Mr. Ohshima refused John’s request three times in order to see just how serious John was about training. Finally, Mr. Ohshima relented and allowed John to get some students together. With its first 60 students, 6th, 7th and 8th grade boys, Maryknoll Karate Club in 1963 became the world’s first elementary school karate club.Over the years, the club flourished. Girls were encouraged to practice. Several hundred Maryknoll students passed through the dojo doors. Many students were also treated to instruction, both in karate and in Japanese, from Mr. Ohshima’s “substitutes.” These included his wife, Yoko, and several of his juniors from Waseda University, including, Sadaharu Honda, Shoji Okabe and Yasunori Ono.  Occasionally, if Sensei was unable to teach an afternoon karate class, he would send us an intense brown belt from Caltech named Jim Sagawa.

As the Japanese-American population assimilated and prospered, it became less centralized within Los Angeles. Families moved to outlying suburbs and could no longer send their children to downtown Los Angeles. Further, as a missionary society, the Maryknoll order suffered from a shortage of religious staff to serve their overseas missions. Thus in 1995, the school was closed. The Maryknoll facility was rededicated as a Catholic and community center locally servicing both religious and secular needs, including the Maryknoll Karate Club. Today, many groups, classes and clubs use center facilities.

Throughout the years, the Karate Club has remained active by bringing in new members and supporting the center’s community efforts. Each year, Maryknoll members continue its Annual Chicken Teriyaki Bingo fundraiser to support club activities.

Local godans continue to lead practices and manage the dojo.   Kei Teramoto (class of 1967) is Executive Vice President of SKA. José Rivera (class of 1967) is active in the dojo and at Maryknoll.  James Uyeda (class of 1973) is a Los Angeles Attorney in private practice. Jerome Williams is a Substance Abuse Counselor and in 1996 he founded the South Los Angeles Dojo. Frank Lee is the Controller for one of LA’s major construction firms.

Jane Uyeda (godan, class of 1979) teaches Humanities at The Bay School of San Francisco and is the leader of the San Francisco dojo.

Sandans include: Ron Lee is a Structural Engineer and a partner with a private consulting engineering firm. Evan Viera started practice with the late Marion Taylor in MA in 2002 and moved to Los Angeles in 2012, he currently works as a Director & Composer. Ron Lee and Evan Viera are leaders of the Pasadena Shotokan Dojo. Gary Domingo, Senior Project Manager for Commsult Group, who practices in New Jersey. Beth Teramoto is a Social Worker for Los Angeles Unified School District.

Many other active black belts and other members contribute their efforts to strong practice and successful dojo activities. Many inactive dojo alumni continue their generous, and well appreciated, support.